Hakuren was within the body of one of her seven ghouls. Ghouls were immortal like herself but in exchange for this immortality had to follow Hakuren’s every command. Ghouls were basically humans that were reduced to mere tools. Surprisingly some gladly welcome the transformation just so that they could be useful. The body of the ghoul she was currently possessing was one of a child. The poor girl had not even a yen to her name and found her life meaningless. She begged a random shinobi, which happened to be Hakuren at the time, to kill her out of mercy. Hakuren refused and instead gave her a purpose.

Hakuren is going to the Hall of Hammers for she wanted a weapon made for her. As she enters the oval structure of steel and glass, she can hear the sound of industry be it the banging of hammers, the sharpening of blades, or the pouring of molten metals. Weapons of high quality were forged in this place.

The purple-haired girl in a black robe runs up to the nearest forge. Acting like a young and innocent girl she watches as a journeyman pours molten steel into a mold. “Excuse me, where do I go to request a…” she pauses as if she was trying to find the right word to use. “A commision?” She then pulls out a bulging coin purse. “I want to purchase a scythe like what shinigami use.” She then pretends to be holding the weapon she desires and flails around. “I heard Journeymen can make special weapons like enchanted and stuff.” 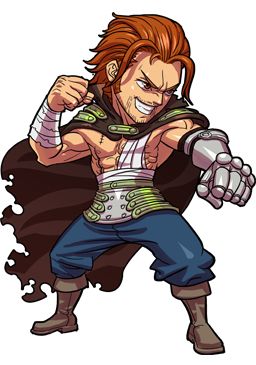 There were very few instances where he didn't wear a mask, at least that is how it had felt for the past year. Whether it was the ANBU work, working against Mikaboshi's reign, cleaning up the former Sennin's mess or establishing a new order or it was his vigilante work, he always seemed to find himself hiding his identity. Now, at least here within the Hall of Hammers, he felt much more comfortable. In here it didn't really matter who he was outside of the hall, it didn't matter what was going on in the world around him, all that mattered was his craft. This, if nothing else, seemed to be a better stress reliever than dressing in a mask and cloak and beating the shit out of people.

That is when he would hear the voice come in from behind him, causing him to pause following his hammer strike. The steel, what at least appeared to be steel, slamming into the glowing metal upon his slab would cause sparks to erupt from all directions under the hammer. He would tighten his grip on the hammer as he turned. Standing before him was a small female figure. She would make a request and then follow up with a comment about the nature of their craft and what she had heard.

Standing before her, the ghoul, would be a man clocking in a few inches above six foot. His hair was slicked back, not with styling product but sweat, his face was covered with a five o'clock shadow and dirt and mess from his work at the forge. His attire was rather simple, a dark cloak with a high collar, wrapped in various bandages due to covering injuries and concealing old wounds of his previous life, but probably the most glaring noticeable thing about his appearance would be the fact that his left arm was made of what appeared to be steel.

"Not sure who is telling you fairy tales, but sounds like a load of bullshit to me."

It wasn't an aggressive tone, although the words could be seen that way, it was a matter of fact tone.

"Before taking a job, there are some things I want to know; how big ya talkin', who are you, who is this scythe for and what's the intended purpose of this scythe? Based on those answers I may or may not have additional questions."

He could assume what the blade was going to be used for, but everything else was a mystery. He had never forged anything for another person, he viewed his craft as an extension of himself, so giving a piece of his art to someone else was something he held with a high degree of protectiveness.

The girl looks highly disappointed that there was no magic involved in the weapons. “But, but your Journeyman. You existed since the age of the first men.” Hakuren was sure the first men somehow fought against ancients. Ancients were incredibly strong creatures and there is no way they used basic weaponry. Perhaps she was overestimating the strength of such beings or perhaps such knowledge was lost over time. With the man’s question she goes to retrieve something. “Hold on I have it here?” The girl opens her shoulder pack and turns it upside down, thus dumping its contents onto the floor. Out of the pack was three sticks of wood about a foot in length each with the thickness of a broom. The sticks were jagged like each stick was a part of a whole that was snapped apart. Also from the pack was a three foot chain with what looks like a kunai attached to the end of it. The last item that fell was a curved blade that seems from the type of weapon she was asking for. Though the medal on the blade was worn one could still feel runes scribed into it. “This belonged to one of my ancestors. Let’s face it reforging it would be impossible, but I would like you to remake another one. Perhaps without the wood components it would last longer.”

The Taisen clan as a family of Yamanaka we seek enlightenment, however the path to such a goal varies from person to person. However the is one key belief that they all respected, ‘to enter into an entity is to know an entity. Through watching through its eyes and experiencing life as it does, you will begin to understand the nature of its existence.’ Not all of her clan limited this belief to living things. This weapon belonged to one that left a part of her soul into her weapon. One that also commonly possessed the dead and thought herself a shinigami. One who dragged the Taisen’s name through the mud and gave birth to Hakuren. It was her mother’s blade broken out of anger.
You must log in or register to reply here.
Share:
Twitter Reddit Tumblr WhatsApp Email Share Link
Top Bottom