The colosseum was a grand structure, towering over most of the surrounding buildings with ease. Fantastic infrastructure and engineering kept this crazy structure up despite all the fights to test it against time itself… However, the young man, in this case, was not really interested in marvels. While he had experienced this idea of being in awe a little bit he was definitely not amidst people to recognise such a feeling. Instead, he was just… lost.

He stumbled about to grounds, not really sure where he was going but instead just walking around as he felt. And since he felt nothing his wandering was very much that. Any kind of giant gateway could just draw him in, like a fly into a jar of honey.

The attaché walked through the gates of the colosseum, confused about where he had ended up. It was a large, open-top room with high rise walls and people sat waiting for something to happen. Seemed like just some kind of normal day here. Nothing to really tell other than that.

”I guess I took a wrong turning,” the Chuunin murmured to himself as he looked around. The people had taken notice of him inside the arena and had begun to get excited and pumped for whatever was happening. Who knew that arenas were for thrill-seekers looking for good fights, huh?

The twinge in his heart told him that he was beginning to feel… excitement? There was a confidence that was beginning to rise as he looked at the people who were building this energy that he could feed off them.

His demeanour began to change with their energy. His kind of slanted and passive stance was replaced with a puffed up chest.

”Yeah yeah! That’s what I’m talking about,” Hajime would call out, throwing his hands up into the air. ”I don’t know what’s going on but keep going! Give me that energy!”

He would stomp and act proud to get the crowd going. Whatever was happening was really making him feel good! 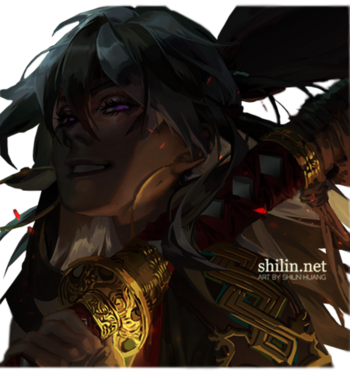 The clack of her footsteps against cobble echoed throughout the desolate halls of the Vespasian Colosseum. "Mrm.. Wonder if there's anyone up for practice today." Kikai had idly muttered to herself as she tightened her vambraces, checking her gears position and over-all her general appearance to fit her general aesthetic.
After some moments, she arrived at the gate entry where she was greeted by an announcer and general combatant planner; with a directed wave and a smile to follow he spoke pleasantly and with a tone of familiarity "Kikai! Fancy seeing you here, or not~ I have some good news though, there's a new-blood that stumbled into the arena and seems about as pumped to go as any. Looks like a real ringer though." Meeting his comments and form with an arched brow she acknowledged with a nod, "If y'want you can head in and I'll get the announcements set; same rules apply as always of course. No death and maiming and all that fun stuff; might wanna tuck y'er necklace away if you can help it.." Followed by a wink, the man had tugged on a lever, in the distant passage the sound of grinding and metal shifting was heard clearly.

"Yare yare" The aging woman dismissed the man with a hand, they both knew the rules; even if it were a formality it was a bit bothersome nevertheless. So without further pause, or conversation she departed down the darkened hall; the walls plastered with stark lighting that only contrasted the darkness with a heavier emboldening. The man had quickly skittered off to a booth, all in preparation for the coming engagement.

Moments passed; the closer she drew the more the uproarious sound of spectators filled her ear drums. A building tension in her muscles, ready to release the pent up fuel of her starved lust for combat had begun to slowly surface. A gentle, but visible flickering of yellow coalesced in her iris's as a docile wafting of energy sifted along her fingers and body.
With the final step, her foot planted into the plenty used sand that filled the core of the stadium. Her eyes set on the man that had his hands soaring in a manner of boaster and a clear work of building the excitement. It was admirable, for the purpose of the arena. The woman gestured outwardly with her left arm, afore planting both hands upon her hips. "So you're today's opponent, huh? Intriguing." At the moment of her full visibility; a portion of the crowd begun to blend in the word of "O'Charos" or "Reaper". While the Merces weren't nearly as hush hush as the ANBU; it was still more or less a strange anomaly of the Main-Branch; but those who were moderately informed knew of the title; and who they were among the ranks of the Assassins.

It was at that moment, her eyes drifted to the announcers booth. "Laaaaaadies and gentlemen! I present to you today's staple match! O'Charos verse the ... Newblood! Give it up for both of them! And place your bets! -- Combatants! Prepare yourselves, and begin on the mark of the horn!"
With her attention reset to Hajime, the focus in them steeled to his persons. It was clear in her stance she wasn't underestimating him with a careless stance, nor a tone of mockery. But something akin to gauging. "Well then. You heard the man." She had let her right hand fall to her side, loose and fingers dancing as if they were ready to grab something. Her left foot drifting ever so slowly forwards in the heated sand.
Kikai
Announcer Dude

The crowd was pumped. Hajime was even more pumped because they were all pumped! It was a sensation that was certainly something addictive. The ability to feel thrill and anticipation, and the ecstasy of being adored was just too much. They didn’t even know the dude, but because he was so receptive to their actions they were reacting in such a positive way that he was a spectacle to watch.

It was only then would the crowd begin to stop and look over to the other side of him. The feelings of admiration and excitement ended as some of them began to chant the name of… what appeared to be a lady clad in some kind of armour. Kind of sucky that Hajime had forgot to pack any kind of armour besides the plot kind.

Hajime would look at the woman in front of him, and eye her up and down to get an idea of what she was like. He couldn’t really place her at the moment, and even with the announcer talking he was more focused on working out what kind of lady she was. Nothing was really too discerning from the way she walked and moved. More of a curiosity to what he was more so than any other feeling or emotion.

”I think I heard him?” the Chuunin thought to himself, putting a finger to his chin. ”I wasn’t really paying attention to him. You seem a lot more prepared for this that I could be.” Her movements would tell him she was ready to take hold of something… a weapon or item? Maybe a style of some sort too?

” I’m afraid I’m not much of a fighter, more of a talker and mediator. I think I ended up in the wrong place on mindless wonders again, happens more often than not.” He put a hand to the back of his head before looking back at the woman. ” Guess I should give you the courtesy of a fight since crowd seem pumped for one. I’ll try to give you a good fight.”

He didn’t have a weapon to really draw, instead he appeared to just be… standing there? Maybe this was going to be an easy fight for the woman in front of him.

The woman's eyes remained steeled, despite the man's aloof air; she had enough decency and respect for anyone that had the capacity to walk into an arena and bask in the energy. Nothing said he couldn't just depart; but he opted to stay, and that alone is worth a modicum of a person's attention- and turn their respect. "Fighter or not, you're here and now- And chose to stay. You'll be treated as an equal" She voiced calmly, but her body and stance indicated preparation for any sort of immediate action.

Pending the announcement, the woman's presence oozed a vile aura of black and purples; even if it were thin and light something hissed at her feet as it prepared.
Kikai