Deep within the Hall of Hammers, locked within his own personal room, he stood before the firey glow of his forge. Upon the table next to him was a bag that he would quickly turn over and empty its contents. From the bag would fall the mask, cloak and body armor of his first "face", the first one to spring to its own version of life, Kasha.

Kasha was a vigilante, not necessarily ANBU even though he utilized their skills. This masked face personified a portion of his life that seemed to be the starting point, the gateway, to all that has come since then. Through this mask he fought through the evil within the Cabal's incursion, he tangled with, both for and against, the one formerly known as Fuu, he had uncovered some of the darkest secrets of this country... this mask was also the one he was wearing when he was rebirthed a second time, at leas the second time he could remember. This mask had seen heroics, horrifics, successes, and failures. This mask was the one designed to strike fear, but the age of Kasha was over. His transition to head of ANBU brought about a new face, and this new face overtook Kasha.

He could easily say that the moment for Tenken, his most recent face, was nearing an end as well. The face that took over after Kasha served the purpose of co-leading the ANBU, but now it seemed like a secondary path, a chore. Kazuki was capable enough, he had cleaned out most of the riffraff of Mikaboshi's reign, but even with all that, he knew he still could not hang up that face just yet.

This brought him back to Kasha. He could not simply get rid of the face nor could he simply leave it hidden. As long as it existed, it could be tied back to him but completely erasing the items from existence seemed like an unfitting retirement. So he would do what his body had been doing for a while now; take the old, break it down, create anew.

He would take the entirety of the Kasha personality and chunk it into the mold casting before him. The items would begin to sink into the previously placed contents of the cast; a large shard of feathersteel glass. How he had come upon the material, this rarest of rare finds, was unremarkable. He found that there was still some buried deep within the recesses of the Hammer of Halls from the previous incarnation of the Order of Journeymen. Not one to look a gift horse in the mouth, he quickly snatched up the hunks of the feathersteel glass to use at his own discretion.

The materials, once separated, would mix together upon entering the forge. The superheating was a process that would take some time, so while that was being tended to, he would turn his attention to his tool, his hammer. The hammer was one that he had first selected when Sousuke introduced him to the order. The hammer seemed to toss him into a past, a viewing through the eyes of his ancestor. There was not only something magical about this hammer, but there was something intrinsically connected to him about this item. It was a part of him and he was a part of it. The tool seemed to draw from him when crafting, draw from his power, his energy, his emotion... everything that he was experiencing at the time of crafting would seemingly go into whatever they were hammering away at. That is why he wanted to be very intentional with this creation. This creation was going to be for a singular reason. Wrath.

It was time to settle things with various parties he had interacted with over the course of this past decade. The Sovereign, the Daimyo, the dark dealings in the country and village, Fuu, Mikaboshi, the list seemed to grow longer each passing year. And for that very reason, that was why he was building this new face. The face that would be a culmination of a decade of anger. A decade of restraint. A decade of failures. A decade of questions. A decade of confusion. A decade of struggle. A decade loss. These things mounting against him continue to take from him. He could no longer stand by and let himself be robbed of anything else. It was time to quell the darkness around him, but he would not be going with some noble endeavor. No, this was going to be a path paved in wrath.

It was a palpable frustration. If someone else had been in the room they would not simply just feel this frustration, but this torrent of hatred, anger, and angst would be visibly emanating from his body. You could see it, feel it, hell you could probably taste it. Unlike normal chakra it did not appear as a light blue or white, instead, it was a heavy and cloudy purple. It was like a manifestation of anger turned into a purple fog. It was consuming the room. Taking firm grasp of the hammer with his fleshy right hand, the fog would disappear. The feeling would seemingly exit the room suddenly and without warning. It was like a light had been turned on that disperse the darkness. That is until one would look down at the hammer. The hammer, now cloaked in an ominous purple cloud of emotion and chakra, would rest in his grasp. His eyes, now deadened and darkened, would turn to his forge.

Drawing the molten liquid metallic mixture from the furnace, he would dump it bit by bit into the new casing, allowing the liquid to find its new shape. Raising the hammer upwards, one would think that this was a mistake. You could not start hammering while the metal was still molten, but this was not a normal smithing job, this was not a normal craft and the tool in his hand was not normal. From the hammer he would start to pour in chakra, chakra of the Ice Element, causing the item to drop its temperature, and the temperature of the room, drastically. Then the hammer would go hurdling downwards, but before it would hit the liquid metal it would stop and emit a subzero blast. The next thing to occur would be the ominous emotive chakra, the physical manifestation of his malice would begin to seep downwards and into the metal. The first action would cause a rapid cooling of the metal, while the second action would cause something entirely different to happen.

Each stroke moved the creation towards completion. Each stroke entrenched more of his angst into the material. Each stroke something was being given life. Given life to end life. As the metal reached a cooled point, the ice chakra would dissapate as his new affinity, fire, would begin to pour into the hammer. The fire would go from its natural orange hue to that of a purple, a thick and bloated hate-filled flame. As this flame continued to burn, his visage would seem to alter. The manifestation of whatever was within him would begin to show once more. Unhinged, unbroken, unrestrainted, un... bent...whatever it was, it was living but wreaked of death. It was dead but full of a zest of life. It was creating but it felt more natural to destroy. And that is what this was going to do... a face of destruction. A face of the devourer. A face of hate. A face of retribution. A face of sins. A face of attonment. A face of wrath.

Would be the only words utter after hours within this room. The name of this new creation, this new face, this new persona. To pick up the mantle of Kasha, birthed from its remains, Gekido would be given life. Given a purpose.

"We have many that need to experience you... we have little time to waste..."

A new chapter was starting, a new existence has been thrust into the rising tension. War was hell? 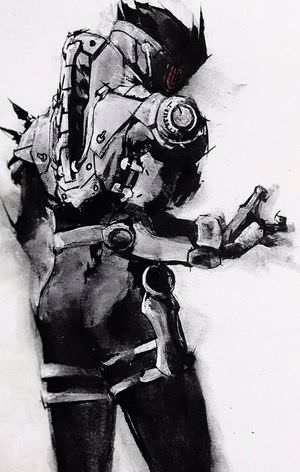