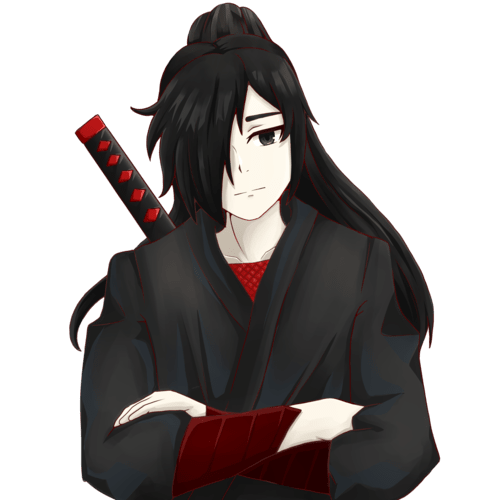 Mental Description
Okami is best described as a lone wolf type, he spends most of his days inside reading books aiming to become more intelligent than everyone else. This leads him to be antisocial in a lot of his interactions with his peers which can push a lot of people away from him. Most of his quiet reserved personality can turn people off especially when his energy when interacting is mostly low. Okami from a young age has been trained by his mother and father both physically and mentally to help prepare him for when he is drafted to be a genin. Okami deeply loves his family very much, he would do anything for them which includes dying for them. Due to his nature of already holding very deep feelings, any friendships or relationships he gets into are for keeps to him as it's already difficult enough to form one with others. Because his Father is a Shinobi for the Hidden Cloud, and his mother also being a shinobi, Okami is mostly left to his own devices, learning to be independent of a younger age than most individuals. In his mind, if anything were to happen to his loved ones, he would set the entire world on fire just to bring himself peace knowing someone paid for their unwarranted deaths.

This said Okami doesn’t pay much attention to romantic things like most of his peers. He prefers to study, to get more knowledge on how to better himself as a human being, a better tactician in battle, or really anything that can improve his way of life. If a female as beautiful as an angel were to approach him where most men would be drooling he most likely wouldn’t have any reaction. Inside his head, most of his thoughts consist of meditation, clearing his head of pointless thoughts, and loves to listen to the sounds of quiet and nature. Most people would consider him a boring individual as he is not one to act out or behave stupidly for attention. If he is in a room filled with people he is the guy standing in the back observing everyone else attempting to find out who might be a threat or friendly. On the positive side once you get to know him he is pretty chill and will do anything for you as he sees you as his brother rather than a friend. The deeper your bond with him the more open he becomes.


History
Orochi Okami, Son of shinobi soldiers, Komai and Cho Orochi married at the age of 18 and trained as kids to be shinobi. They were trained together on the same team and once they discovered their love for each other they allowed it to flow naturally. Eventually, after getting married, Cho decided to temporarily retire from being a shinobi after getting pregnant with Okami so she could take care of him while his father Komai worked. Okami was a quiet boy raised in a traditional normal Japanese household. No siblings to speak of, as Okami got old enough to walk Komai, his father attempted to train him physically the best he could. His father taught him as much taijutsu as he could to prepare him for when he was drafted. Okami was taken at the age of 8 to the academy. In school most of the day, he kept to himself and stayed away from the other students preferring to read under a tree in silence.

Yui is a hyper Japanese girl, very talkative, and very open, a childhood best friend to Okami he met at school. Okami on the other hand is very reserved, quiet, and hesitant. He spends most of his days as stated above his nose in a book, when the teacher calls him he answers the question before it is asked. Yui finds this extremely annoying as soon as he is done answering he goes right back to reading and doesn’t interact with the other classmates. So one day Yui decides she has had enough of him being a quiet coward and walks over and begins screaming at him at the top of her lungs to speak to her, to notice her, and interact. Even going as far as to scold, judge, and berate him about it. Okami doesn’t even hear her nor notice how loud she is until the teacher has to brings it to his attention that Yui is talking to him. Okami lifted his head up and asked who she was. This only made Yui angry and it earned him a slap across his face. In the hallways, she would follow him and call him names until he finally turned around to face her only to tell her to leave him alone. It took a few years but finally, Yui managed to aquire her wish for Okami to pay attenion to her.

Okami was reading his book one day and Yui asked what he was reading which sparked his interest that she may be interested in something he likes. Still, though he was embarrassed about the type of material he was reading only to tell her it was about “romance” and to his greatest regret, she grew incredibly excited about it and wanted to read it. However, he was reluctant and told her never to mind. She snatched the book from his hands, read it, and grew blood red in the face only to read it to the whole class, embarrassing him and his family who had to be called into the school in order to address the situation. Komai, his father was very disappointed in his son despite the fact that he owned the lewd book, to begin with. He grounded Okami for a month from any activity and he was suspended from school for that whole month. This was fine with Okami since he preferred to be left alone and actually enjoyed the peace and quiet in the house. When he returned to school Yui immediately confronted him calling him a pervert and a nasty butthole. Okami asked her if she wanted to have lunch with him after school, Yui grinned as her whole sadistic plan to get him to open up worked. Okami agreed to pay for her lunch in return that she quieted her ridiculous behavior and acted more appropriately around him. From that point on Yui and Okami became best friends, anytime that Yui wanted to talk, Okami was there to listen, and anytime in class, he was a bit more vocal than normal, at least around her.

Welcome to NINPOCHO!
and
WELCOME TO KUMOGAKURE

On behalf of Council, I welcome you to the Village Hidden in the Clouds! Please continue to follow the steps in the First Timers' Guide.
We will add you to the user group giving you access to the village and give you your starting yen. Please put up a profile in the appropriate area and have fun!

If you happen to have any questions about NC or Cloud feel free to contact any Council Members. A list of these can be found here!

ALSO! Feel free to join Ninpocho's own Discord. Many of us use it for arranging roleplay and general chat!

Do your best to have fun and engage in jolly co-operation with your fellow Kumo-nin!