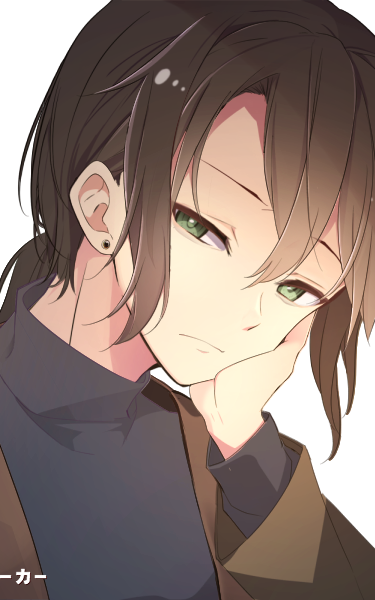 The tall stacks of papers certainly served to muffle the murmur of voices and tapping of feet in the passport office. Still, even with these 'measures', Nobu could not escape from the constant buzz of noise that followed him around. Tucked inside of his pocket was a scroll - one he'd found while running an errand in the Domen family archives. It discussed a Domen sage who had abandoned her previous family to guard and take care of a shrine in Moon Country, only to then fall for a Domen merchant who had settled in a nearby village. She was one of his ancestors, several generations before, and had rarely been mentioned by the family elders.

Normally Nobu wouldn't have cared, but the important part was that she was a sage. The boy had read about sages, of course; people who had formed contracts with beings of nature, who had in turn taught them how to control the natural energy around them. In short, power. Power that the boy desired, for no reason as severe as revenge or the desire to protect - simply for the sake of power itself. There was a single issue; the scroll was a historical document, not an instruction manual. The only hint the boy had was the shrine, which was outside of Sunagakure. But the scroll contained the shrine's location, and apparently there was always a sage at the shrine. And so, Nobu's journey would take him to Moon Country. It would be a valuable experience, too, getting out of Wind Country. Nobu had never seen the sea or forests, but his journey would take him to both.

It took some time for Nobu to find someone who resembled an official, someone who could provide him with a passport. The individual would find a boy no older than 12 with a messy bush of white hair tugging at their clothes. "Hey, you. Can I get a passport? Moon Country, one year." Nobu asked.

High functioning, high stress. That was Isogashii. You didn't need to know that about her, you could see it from her. The tiny frame, frantically working on paperwork, was typing and processing thousands of keystrokes and shuffling papers within seconds. If there was a Sage of Office Work, she had achieved it. It was in this moment she would hear a voice, something she was not expecting, that would cause a stack of papers flying up into the air.

"WHAT THE LITERAL HELL!?"

The raised voice would be teeming with her frustration, but the busybody she was would not allow it to linger. Without hesitation, she would quickly switch her demeanor, well sort of...

Within a split second, she would be tapping her foot against the bottom shelf of one of the several filing cabinets that lined her space. The shelf would shoot open and with shinobi like precision would almost instantaneously pull a folder from within it and bring it to her face.

She needed to cut caffeine out of her life.

She would slam the folder down on the table and cast a sharp glare at the boy before her.

"Who the literal fuck are you? You think this office works on "Oh, hey, give me this?" Is that how you think this works? Does that sound right to you? I am not that old bastard, who kept horrid records and just let people come and go as they please. So, if you'd be so kind..."

With each word she would tap her hands together.

She really needed to cut caffeine out of her life.

Nobu initially didn't respond as the woman exploded into a panicking yell that soon gave way to near-frantic work. The boy simply watched her with a flat expression, not bothered by her reaction but not thrilled by it either. Nobu didn't much care about the woman's work weight, and instead just wanted to get out of the village. At least she seemed to be preparing to give him a passport of some kind. Shelves and folders soon became involved, before finally cursewords joined in.

In reality, Nobu had expected a negative response right away. Nobody had bothered to tell him how to get a passport in the academy, and he sure as hell hadn't asked his parents or teachers. None of them would approve of his leaving, but he was a genin now. If he made the choice to pursue this, he would.

"Do I look like I know how this office works?" Nobu replied sourly, before looking around at the mess. Genin or not, he was still only twelve. "Actually, I'm not sure anyone does..." he added under his breath, but loud enough for the woman to hear. With a gesture, the boy waved the lingering remark away. "Whatever. The name's Domen Nobu, genin. That's D-O-M-E-N. Nobu's spelled exactly like you think it is." he replied, slightly impatient.

The look of sheer annoyance would not just be on her face but would almost be a tangible aura that could be felt in the air.

"You may be young, but you can't be that dumb."

It wasn't a question. Rhetorics at it finest.

"You don't know how something is done, so instead of attempting to ask you merely stumble around... that is fine and forgivable, but when you find someone you don't ask the appropriate approach, you demand, and poorly at that? That isn't forgivable."

The lecture was gearing up.

"Let me ask you, say you were in charge, and some young child stumbled upon you, much you had to me, and asked for something, not knowing or caring to understand the appropriate process; would you feel comfortable giving them a pass to leave the village? I mean, are you traveling alone... if so, based on this simple interaction I can tell you just how screwed you are. You may have shinobi ability but lacking common sense, tact, and social etiquette will get you killed."

It was all the truth. Could she have put it nicer? Sure. The boy could have also handled this situation differently, and this was the way of the world. If you want something and you ask for it incorrectly, you cannot expect to not get criticized. She wasn't done though...

"And if I were you, I'd correct that attitude and tone. Your name, your family, your standing as a shinobi will not help you at this moment. I am not here to serve your whim, I am not the one needing to bend my knee to you, oooooooh, no little boy. It is the complete inverse. I have something you want, right? Now let's take a moment and consider what you'd do at this moment. Some little runt bugs you, asks for something, give an attitude, still hasn't apologized but is expecting something from you... would you be giving it to him?"

Her annoyance that was radiating from the onset of her recent verbal tirade had subtly shifted in the middle of her words to the point that by the end of her most recent comments she was no longer sounding annoyed. She was sounding condescending. She very much felt the control she had, and she wanted to see how the boy would handle the current situation. Was this a test? Had he failed? Was there more? Was this over?

What words would Nobu choose next?

The woman's following outburst earned her little more than a venomous glare from the boy in front of her. He didn't like being talked down to, so her tone definitely didn't help the woman's words get any grip on the already slippery slope of Nobu's learning ability. Luckily, the boy had enough awareness to see that the woman wasn't just going to give him his passport if he continued his attitude. That meant that Nobu had to find a decent truce between pleasing the woman and keeping his opinion on the subject. That meant one thing: he had to swallow his pride and apologize, even if it meant lying through his teeth.

Planting his hands on his waist and sighing, Nobu looked up at Isogashii. "Look, I'm sorry." Nobu apologized, though he nonetheless sounded somewhat reluctant. In his opinion, if she wanted to lecture people, she should've become a teacher. He just wanted his passport so he could pack his bags and leave. Every second he spent here in the passport office was a second someone from his family could catch wind of his plans, at which point they would no doubt make moves to stop him from leaving.

"Things have been stressful of late, between my exam and needing to leave. I just need my passport so I can go. My family heritage is on the line here." he added, before crossing his arms again. Frankly, Nobu's chance of success was nebulous at best to begin with. Multiple generations had passed since Domen Tsubasa's death. Would the shrine even still be there...?

OOC: Nobu is granted a passport. Was going to play around a bit more depending on your response, but with my needing to be away I did not want to delay you without any purpose—so enjoy the travels!
You must log in or register to reply here.
Share:
Twitter Reddit Tumblr WhatsApp Email Share Link
Top Bottom