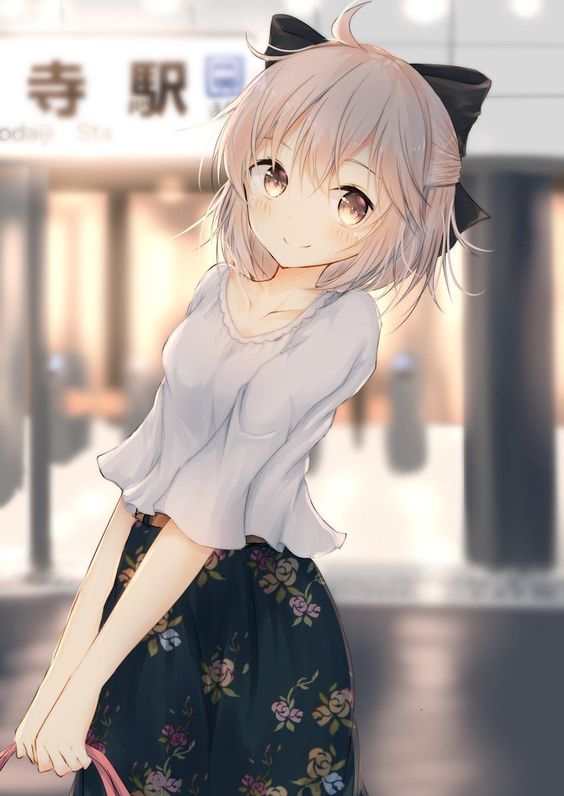 Yuuna was wondering around the Rolling Hills in the search of something, she didn't know. But this her second time out of the cloud village and she was still in search of that Holy Lake. Today, Yuuna wore some quite different clothes, it was completely different from what she usually wears, Today she wore a white top with a Green long skirt with flower patterns on it.

While Yuuna was walking she felt some chakra disturbance due to her prodigies talent, she was able to fell it without any problem. without any wait she started running in that direction as while she was running in that direction she saw a blast happen on the same place and one of the mountains started falling, by luck that mountain didn't fall at the place where Yuuna was. And when Yuuna arrived there was a Monster or some kind of spirit doing some destructions as Yuuna observed the place, she saw a boy lying on the ground, nearly at the position of losing his consciousness. As that boy lost his consciousness, that spirit started fading away. And then Yuuna ran near that boy and raised his head and put it on her lap while waiting for him to get his consciousness back.

And then after some hours later, that boy got his consciousness back and then Yuuna asked him "Are you alright? Can you move?" and then after asking him this, she asked him one last question about that spirit, "Hey, What was that spirit or monster anyway? Can you tell me? I'm curious about it?" As that prodigies girl ask him this while forgetting her own weakness, that was shyness whenever she meets a stranger. She waited for that boy to get up and answer her questions.

Always getting themselves into trouble, one way or another...but he hardly had any room to complain on that front, he'd gotten into a fair bit of trouble himself by engaging in similar activities. Although, in his own defense, he had always emerged from them alive and conscious. Eventually these habits of self-reliance enabled him to become what he currently was but that was more due to a lack of patience and a lack of adequate teachers for the subjects he wished to delve into. The least he could do now that he was in a position to be the educator would be to gather these dangerous misfits and keep them from killing themselves and each other in pursuit of power.

This was all, of course, in response to the explosion of chakra that caught his eye while he was outside of the village conducting gathering and research on the life forms out here, plus it was just nice to be away from humans sometimes...well, in theory at least. There were always more humans, sort of like cockroaches...except on fire...and screaming about it constantly....so not at all like cockroaches. As we all know, the Moon Country Screaming Fire Roach is just a rumour (a rumor he would have to determine the veracity of some day.)

Yukiin darted from his own path, bounding to the site of the explosion in a few steps of high-speed motion, dispersing with the pleasantries and restraint of walking at a normal non-shinobi pace. He didn't know if anyone needed assistance so appearing on the scene as quickly as possible was for the best. Once there he noted the fading presence of an otherworldly entity, at first assuming it belong to the unconscious victim, more likely the sparker of the explosion, but quickly determining with a glance over the body that he was still in possession of his faculties, mind, body, and soul still cohesively held together. Although lacking any chakra sight or similar endowment he was left to rely on physical indicators of such, namely that he was still breathing and that the apparition lacked much of the human form of soul he was familiar with.

It was extraplanar. A summoning attempt most likely, this was confirmed further by the scattering of materials that were commonly only used for such purposes and the presence of the seals also used in such a process. It would appear that either the victim was without a contract and attempt to forcibly pull something into this realm or he had one and tried to pull something that was beyond his chakra levels, draining him to the point of unconsciousness and failing to materialize what he was attempting to pull down to this plane. An amateur mistake.

"He should be fine, he just needs rest to recuperate his chakra." He responded, turning to face the girl. A quick examination of her told him that she was of little threat but he remained on guard regardless, prepared to strike out if she was some sort of decoy or was concealing her actual abilities. Yukiin wasn't a sensor, these mistakes could only usually be made once.

"That spirit was a failure to summon, either due to a lack of contract or attempting to call something within his contract that was beyond his abilities. It can consume a great amount of chakra to summon living beings, especially stronger ones, so it happens sometimes when young shinobi forget their limits."

As Yuuna was waiting for Yukiin to reply or at least response to her voice, she also observed the area carefully while taking care of Yukiin on her lap, after some minutes later Yuuna heard a voice out of nowhere as she turned her head around, she wasn't able to see a thing, then she faced towards Yukiin but he wasn't moving at all. So she guessed that it was kind of the same spirit as Maru has one. And that voice told Yuuna that Yukiin will be alright he just needs a little bit of rest because he has lost at least all this chakra, but Yuuna still wasn't able to find the source of the voice that she heard. As that voice gave the answer to her second questions saying that it must be a summoning failure due to some reasons like Lack of contract abilities or summoning some heavenly or ghostly spirit beyond his abilities.

Then after hearing her answers, Yuuna replies with a smile on her facing "You will be alright." as she was patting that boy she said, "If you want, you can do a little more rest on my lap." As Yuuna kept checking on the surrounding area for some more clues about how this happened? Then, after a half an hour, Yukiin was gaining his consciousness. Yuuna asked him, "Hey, What is your name? I'm Yuuna! nice to meet you." as Yuuna continued, "Can you teach me that summoning also! please!" then Yuuna waited for him to reply as she was so curious about learning that jutsu and more about those spirits like she just saw in this accident and also about the one who was with maru.

He spoke with a staccato and tenor that implied disinterest but if she persisted in trying to harm his patient, even through ignorance, she would be swiftly informed with a retributive swipe of a flat palm to her head. He was not as passive as he appeared, he was more spider-like in that he concealed his thoughts and attitudes until they were expressed in response to stimuli, offering excessive information in situations were there was uncertainty was foolish. For all he knew, she was a plant and waiting for him to make a mistake to call in back up and shove a blade in his neck.

As to whether or not he'd like to teach someone how to blow their chakra system like this? Not really. It was a foolish thing but considering that he had attempted it on his own regardless of whether or not it was a good idea in his own time as a lower-class shinobi...it might be wisest to bring one into tutelage then to allow them to explore the subject on their own and suffer the increased risk of backlash.

It was the decision of whether to take a known, substantive but minimized risk, compared to one that was unknown and could be quite large. The largest variable was whether or not they even had sufficient knowledge of chakra usage to avoid harm channeling even a minor amount of the substance through them and constituting a physical form for a spiritual creature, so it would be best to start there before he made any further decisions on that front.

"I will teach only on the condition that you follow instruction and possess the bare minimum amount of ability to make it feasible. To both ends, show me your best jutsu, whichever type or category you feel most confident in. It won't kill me, most likely..." He paused a moment, lifting himself and sighing as his fingers went through a series of slow handseals, mostly as a reminder of what they were to the student in case they'd forgotten or hadn't learned them properly or whatever it was the Academy as failing at today. "...if it does...well, that's inconvenient."