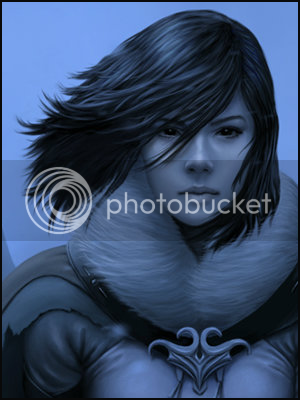 "Hello sir, I'd like to request transfer into the Raikage Guard. I believe I am qualified and my skill set is ideal for the job. My specialty is stealth and subterfuge specifically. I can remain in the shadows for hours on end, and have trained my body to remain completely still for the same amount of time. My Kinjutsu is Chimera, and my second specialty is of the Yamanaka clan. I can use poisons to my advantage and use powers of the mind to subdue any threat towards the Kage himself." she said, determination in her voice.

Kagura was in a meeting with the new Sennin. It had begun moments ago and she was already making her case.

[I'd figure I would skip the retarded intro posts.]​

Shuusei Touma - ANBU Captain
ANBU Sennin Kogami's Representative​
The Sennin was currently out of his office, and nobody was entirely certain when he was going to be back. Fortunately, his NPC representative was contacted about Kagura's assignment change request and he came in to hear her case. She would see him pass by her in the waiting room for the office as he entered Ayumu's office himself. The secretary nodded at Kagura to follow him. Inside, Touma had taken to leaning against the desk with his arms folded over one another. With his perpetually masked face one could never tell exactly what he was thinking until he spoke. "Oshiro-san, what brings you here today?"<i></i> he asked, prompting her to state her request although he already knew the subject of the conversation from what he had heard when he was contacted. He had the authority to approve her request if he deemed it appropriate.

Kagura stated her request quite plainly giving her reasons for why she felt she was qualified to guard the Raikage. She was a specialist in stealth with the ability to stay hidden for long periods of time without being noticed. This would obviously be useful as the job of the Raikage Guard usually had them stay out of sight until needed. Nobody wanted to think the Raikage actually needed guarding so for appearances it was best they weren't seen if it was possible to avoid. Kagura also had the Kinjutsu known as Chimera which made her a hybrid type of shinobi able to use the abilities of multiple shinobi in one neat package. The Yamanaka bloodline which she had obtained through a transplant gave her access to abilities which let her create powerful poisons and also cunning Genjutsu which she could use to strike at enemies from the shadows. She certainly seemed qualified, but a question remained.

"Why do you wish to join the Raikage guard?"<i></i> Touma asked. It was a sudden request to be transferred into the guard. Many ANBU did not wish to be part of the guard because it wasn't always the most interesting or flashy job to sit in the shadows and watch over a man. Due to the job taking place in the shadows, it wasn't one that offered much glory though anytime an ANBU wore a mask there was little chance of personal recognition outside the branch. Despite this the Raikage Guard was tasked with protecting the most important person in the village. It was vital to know that those taking on the job were trustworthy and had noble intentions for doing so.

Perhaps it was best to just tell the truth. Kagura's dark eyes looked at Touma for a moment before smile. "To be honest I rehearsed this speech for the sennin. See, I'm tired of being some random mask in the crowd. I want Ayumu-san's job and the best way to get it is to get close to Raikage to make myself known to him. If I do a good job, if the Raikage relays that I do a good job, it's basically an easy path to leading this branch. Merits and commendations are how we get ahead in this profession is it not? Standing out is a must."​

Shuusei Touma - ANBU Captain
ANBU Sennin Kogami's Representative​
Touma watched as Kagura seemed to pause and consider what she was going to say next. She then looked directly at him and smiled before speaking. What she said was unexpected. Usually those that wished to join the Raikage Guard insisted that their reason for taking a position on the Raikage Guard was that it was a great honor or that they felt the protecting the Raikage was more important than anything. Touma smirked slightly under his mask, though it was invisible. It was funny, in a way, an ANBU saying that she wished not to be a mask in a crowd. That was almost the entire purpose of being an ANBU. Their ability to become anonymous made them useful in ways other branches couldn't be. It was true, however, that the only one that was truly known to the village was the Sennin himself.

"Ambition, then. The Raikage does have the true final say in who would become the next ANBU Sennin in the event of our current Sennin. Generally the previous Sennin will have a candidate selected in advance to take their place. Most often, it is their Vice Commander. As I'm sure you know, being so ambitious, Kogami-sama does not currently have an official Vice Commander. Though I unofficially take on the same duties, I would only take the position if there was no other choice, and only in a temporary manner. But I digress. You have a history of dedication in this branch and I see no reason not to grant your request. Unless the Raikage himself has any objections, I will have administration process your transfer,"<i></i> Touma said, ultimately decided to allow Kagura to join the Guard. It was no flashy job and generally it involved simply standing by and waiting vigilantly, but it was important and recognized by the ANBU Branch, if no one else. Touma would wait to see if Kagura had anything more to say or if she would depart. He had learned a bit more about her from the meeting. Her record spoke for itself which was why he had truly decided that she was fit for the transfer, but now he knew what kind of person she was and what she was aiming for.

Kagura listened intently to his words, and the knowledge he was passing, most of which she had a vague understanding of before hand. She bowed respectfully and said "Thank you sir. Both you and the sennin will not regret this decision. My life is the villages and I will give it for the Raikage in a heartbeat." she finished, and then stood straight up before leaving the office. Within the next few days, she would receive official approval from the Raikage and be on her way to rising through the ranks.

Touma listened to Kagura's thanks and her promise to protect the Raikage with her life. There would be oaths to undertake to reaffirm that promise, but for now she would need to to prepare herself for her new duty however was necessary. The Raikage still needed to approve her, though there seemed little reason that he would deny the request. Touma, now done in the Sileo for the time being, stood up and began walking to the nearest exit.